On the recommendation of a coworker, I’ve begun reading Lloyd Alexanders’s The Chronicles of Prydain book series to my kids. I hadn’t know about this series, though I had known the second book’s title The Black Cauldron from a video game I had played in my own childhood. The video game apparently was commissioned by Disney, who made a movie version of the Newberry award-winning book. Well, I was apparently basically illiterate as a child (or more likely, my small-town library didn’t have these books, though my mother in perhaps her most formative and best parenting moves made sure I had frequent and mostly unfettered access to the library), but somehow we managed to score the video game to play on our Tandy 1000 computer. This computer had 640k of memory. That is kilobytes, not megabytes or gigabytes, mind you.

Beginning to read the series with my kids has helped me recall the videogame, and I’ve found some YouTube videos of a play-through! I remember toiling away at this game and being so proud when I could play it through at last. We had the Tandy but didn’t have any other actual cool gaming system until much later (my sister’s Nintendo, which she bought during college and brought home over the summer; to be fair, we did have a Texas Instruments gaming console with lame versions of various games, but it was hardly cool [though still, in retrospect, it was still a good bit more than most in my podunk town had, so in a way maybe my parents were pioneers]).

Looking at the game now, I think it’s sort of ridiculously low-fidelity. It’s tempting to quip that Minecraft has just barely surpassed the graphics quality of this nearly 30-year-old video game, but Minecraft is really quite a bit more complex in spite of its low-fi graphics. My kids could basically program a game these days of similar complexity to The Black Cauldron using Scratch.

Watching some of the video play-through has filled me with nostalgia. How vividly I remember some of these screens and the trials of trying to get past them!

Here’s the first video in the series, in case this was, against most odds, a part of your childhood too:

Other games from this era that we played were King’s Quest IV and Police Quest. I also played a whole lot of Earl Weaver Baseball, under which in certain circumstances (I forget specifics) you could hit a home run over the backstop.

This was in the days in which we used DOS with the ubiquitous C:> prompt and our calendars and document management were handled by a program called Deskmate that looked like this (credit): 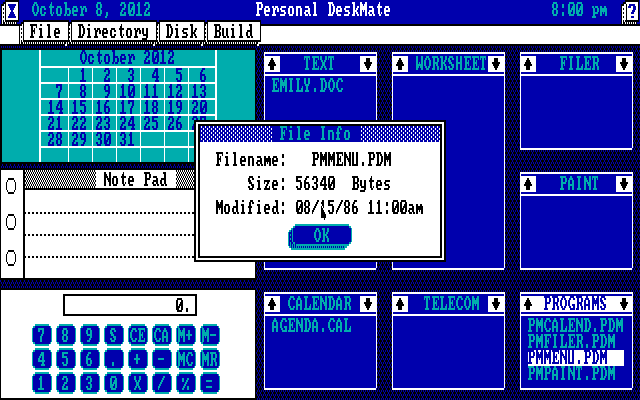 3 thoughts on “The Black Cauldron”