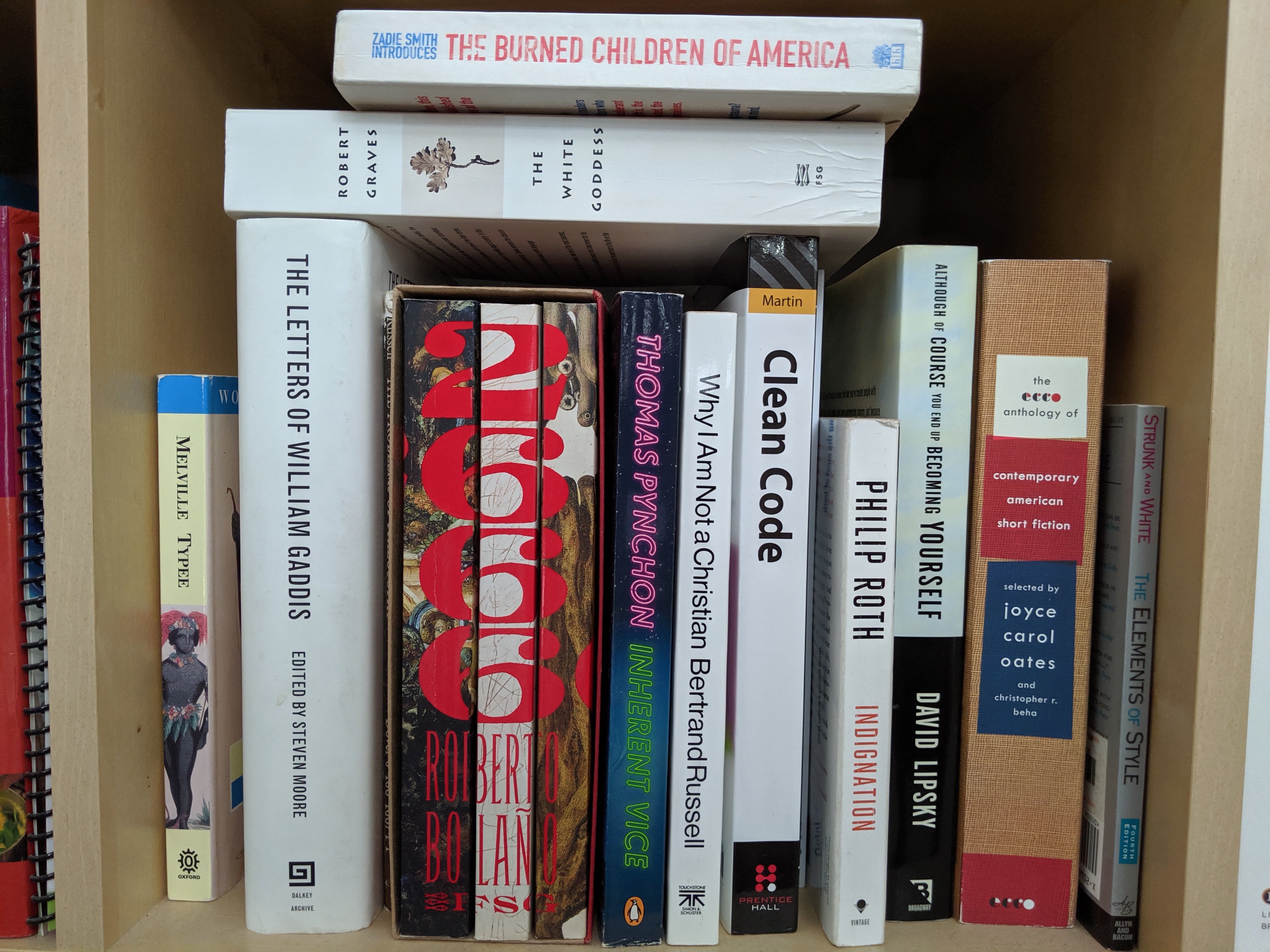 I last did one of these bookshelf posts nearly a year ago. I’m back! I’m skipping shelves 16 and 17, which hold mostly cookbooks, most of which I don’t ever consult (so why do I keep them?).

Starting along the top, there’s a repeat. The Burned Children of America anthology lived in shelf #15 when I wrote that post, but I’ve since loaned it out and placed it back on this shelf because my system of shelving is a little imprecise.

I’ve meant for years to read Graves’s The White Goddess, and it’s probably part genius and part poppycock. I liked it a lot and wrote a brief review of why I liked it here. I doubt I’ll ever read it cover-to-cover again, but I could see visiting bits and pieces of it again from time to time.

I don’t think I ever finished Melville’s Typee, but one day I may. I generally keep Melville books.

Gaddis is one of my favorite authors, and I coveted this book of his letters for years before finally buying it last year. I gobbled it up and have already consulted it a couple of times as a reference when reading the Graves book above (Gaddis used it as a reference and even met Graves to talk through some ideas) and rereading Gaddis’s J R a few weeks ago. It’s a gold mine of info about how Gaddis lived and grew as an author, and it’s surprisingly readable.

I’ve read 2666 two or three times even though I really didn’t even love it the first time I read it. A lot of it is really rough going. Some of it is pretty compelling. It’s a translation, and I’m generally pretty iffy on reading work in translation. Still, I’ll bet I wind up going back to it sooner or later. I’ve written about it at some length in years past here and here (the latter link points to a catalogue of the novel’s dreams I kept for an online group read).

Inherent Vice is short but was not very fun. Still, I keep Pynchon and will likely wind up rereading most of his work one day.

Bertrand Russell was formative for me when I was in college. He was a mathematician and philosopher. I am neither and certainly couldn’t pretend to understand his work in mathematics, but the essays in this book are (as far as I recall — it’s been 15 or so years since I reread any of them) pretty digestible. It was Russell whose work helped me make some declarations about my own beliefs that were pretty hard to make when I was younger, so I think I’ll always have a soft spot for him.

Clean Code is a book I got through work years ago. I’ll never read it again (I don’t often write code anymore), but work bought it for me, so I’d feel weird about getting rid of it. It’s a good book, just no longer relevant to my work or interests. Tucked in to the right of Clean Code and only partially visible in this shot is a book called Kanban and Scrum, another work book about some light-weight project management methods.

I’ve read only two or three of Roth’s books. I want to read him because I understand that he’s important, but I’ve had trouble making myself sit down and read him. I liked Portnoy’s Complaint and felt meh about some other novel of his and meh or better about a collection of novellas or stories or both. I’ll read Indignation some day, I’m sure, as I will a few others of Roth’s that are tucked here and there throughout the house.

Although of Course You End Up Becoming Yourself is a book about the press tour David Foster Wallace made in conjunction with the release of Infinite Jest, which as has been noted time and time again in this series of posts has been one of the most formative pieces of literature for me. I’ve not yet gone back to this book, but it was very meaningful to me and I may one day. I wrote a review shortly after its release here.

I’m a sucker for anthologies and picked up the Joyce Carol Oates book I forget where I forget how many years ago, but I’ve never cracked its cover. Maybe one day I will. I know that as soon as I get rid of it, I’ll discover a pressing need to read something it contained, so I’ll likely hang onto it as a sort of talisman at any rate.

And finally, The Elements of Style, which in an earlier edition I was made to copy large portions of out by hand in a high school English class. There’s plenty of bad advice in the book, and I’ve read critiques of it that’ve seemed to hold water. I can’t recall a time I’ve gone to this book in the last couple of decades for any practical advice (for that I go mostly to Garner back on some of the earlier shelves). But it would seem kind of weird not even to own a copy of it, so this one’ll stay shelved forever.