I’ve written about Dungeons and Dragons related things a couple of times now. What was a hobby I had undertaken semi-begrudgingly for my son’s benefit has become something I’ve begun to spend time on for my own interest. I watch Critical Role with interest now (not every episode and not always full episodes, but I’m sort of hooked). I spent many hours over the last couple of weeks preparing for session three of the Lost Mines of Phandelver campaign that my neighbor and I are running (alternating turns as DM and players) for our kids, and our third session yesterday ran to nearly six hours. I’ve looked at lots of game play accessories (dice, DM screens, dice vaults, dice towers, miniatures, and so on) online, and as a result, I’m now seeing ads for a lot of these things in Facebook, and I click them with interest.

Initially, I had sort of sneered at the idea of having a DM screen and certainly at the idea of having a dice tower. Who needs a special box to roll dice when it’s dead simple to just roll your dice by hand? But after I made my DM screen, I began to hanker for a dice tower after all, so I picked up some more wood and made one. What is a dice tower, you ask? It’s an apparatus you can use to increase the odds of a fair roll rather than relying on what might be a bad toss from the hand. The tower is essentially a box with some little ramps inside that a die will carom off of as it descends through the tower and rolls out onto the table (or, if you’re really fancy, into a dice tray).

I didn’t take step by step photos as I did when making the DM screen. Construction of the tower was, in theory, pretty simple. But I twice glued the thing together incorrectly and had to dismantle parts of it, sand, and reglue each time. Finally I got it put together correctly and then sanded a little and applied another coat of stain and another of finish. It’s not the best made or most beautiful thing in the world, but it roughly matches my screen and is surprisingly satisfying to chuck dice into. The dice make a nice fast rattling sound as they tumble through the tower.

Here’s the tower as seen from the front (the players’ view, if I’m using the tower myself as DM):

Now here’s the view from the back, with the opening that the dice come tumbling out of:

Looking down into the top, you can see one of the little ramps (mine has three, with the bottom one angled so that it sends dice shooting out of the opening): 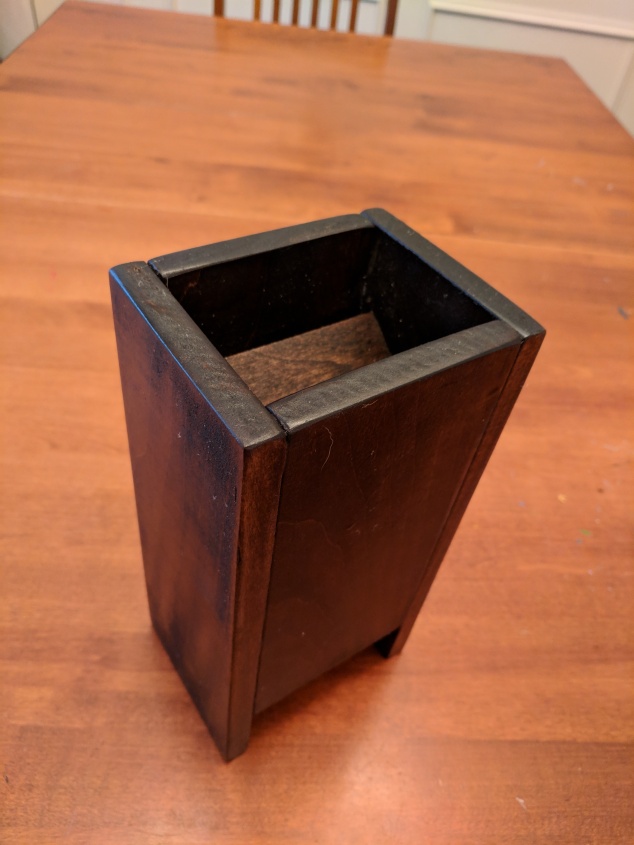 Since I didn’t join the two hinged panels of my DM screen together, I can place the tower between the two panels, which gives me a little extra width on the screen and lets me easily pop dice into the top of the tower when I need to make a roll: 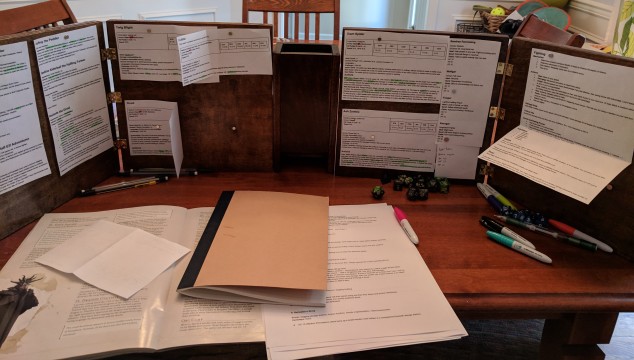 The tower’s height doesn’t match the height of the screen, so I suppose it looks a little weird. I enjoyed having it, at any rate. Wonder what random thing I’ll add to my growing D&D collection next?

One thought on “Dice Tower”