I worked for years as a computer programmer, and one thing programmers often do (in fact, this is what gets a lot of people into programming in the first place) is to turn a minor annoyance into an excuse to spend a lot more time building a solution to the annoyance than the annoyance itself costs. I don’t write much code these days, but I apparently still have that programmer mindset.

I wrote a couple of months ago about how I had been trying to help my son realize his desire to play Dungeons & Dragons. We finished the campaign I wrote about in that post, and I began preparing to be the Dungeon Master (DM) for the D&D starter set, which includes an adventure titled The Lost Mines of Phandelver. For somebody new to the game, it takes a lot of prep to feel ready to DM a game. I read the campaign a few times, took some notes, made note cards for the various monsters we would encounter, made some notes for myself about things like how to run combat, and made index cards with key information about each of the players who would be in the game. Then, a couple of weeks ago, we had some neighbor friends over and started playing.

It was fairly fun, and I didn’t do terribly, I don’t think. For example, I drew a map of one of the dungeons on a big whiteboard, covered it up with paper, and ripped apart bits of paper to expose parts of the map our campaigners had “seen” as they forged ahead. We used lego mini-figs and a few other little figures from the toy box to represent our characters and to help us visualize combat. It’s perhaps not the best DM prep in the world, but it didn’t seem too bad for my first time out. Here’s a photo of the adventure in progress:

As the game progressed and we met more monsters, I found myself juggling index cards with monster and character info, the book containing the adventure info, a couple of cheat sheets I had made, a little book I was keeping notes in, and so on. I also had some monster figures hidden away in a box on the floor, so that I didn’t telegraph prematurely what monsters we’d be facing (though in one case, I had to use a lamb figure as a wolf, so I don’t suppose I was telegraphing much beyond whether the creature was a biped or a quadruped). It was a lot to juggle, and it was frustrating to rifle through papers while trying to keep the game moving.

DMs have been using things called DM screens for ages. Think back to when you were presenting a science project at a science fair in school — DM screens are foldy things that stand up and provide both a way to organize information in front of you and a way to hide things you’d like to hide, such as DM die rolls, info that might spoil what’s coming up next, and figures to use in upcoming combat. I had looked at DM screens online but didn’t really want to pay for a cardboard screen that contained different info than what I really wanted in front of me. They tend to have loads of info by default, and while I need a lot of it, it can be pretty overwhelming. If I was to use something, I wanted something that could be a little more customized.

In my browsing the web for DM screens, I saw some neat, expensive ones and some fancy homemade ones. I’m not handy at all, but my programmer mentality kicked in and I decided to spend a lot of time trying to engineer a screen that would meet my needs (that is, help me avoid shuffling papers and cards around) and that wouldn’t look terrible. I found this explanation of how one person made a simple, functional screen and picked up the necessary materials. I carefully measured and sanded and drilled and stained and had all the components of a lightweight, wooden screen ready to go, but when I tried to attach the hinges, the very thin wood splintered, and I could tell that it wasn’t going to work. It was a little frustrating, but I wasn’t ready to quit. I would refactor instead!

I had some roughly 1-inch plywood left over from some house project a while back. I hadn’t used this initially because it seemed pretty bulky and heavy, and I had hoped to have something a little smaller. But, as clumsy a carpenter as I am, I figured my odds of not messing up were probably greater with less fragile materials. So I cut two of the boards (which were conveniently already each about 2 feet wide) in half. 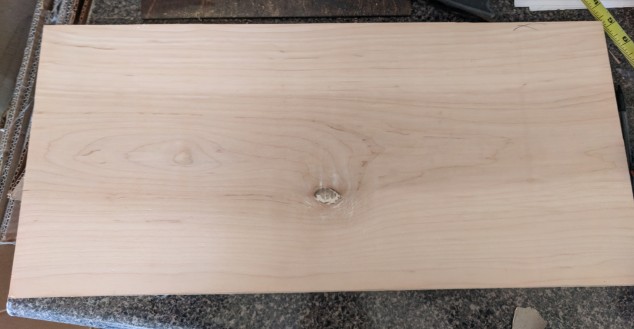 Next, I and placed my hinges so that I could draw hinge placement guides and drill some pilot holes, and I sanded. You can see here that I really am a bad carpenter, as that middle hinge is way off center in spite of some attempt to space them evenly.

I had gotten some rare-earth magnets to embed in the panels so that I could affix things to the front. In my first failed attempt to make a screen, the panels were thin enough that the magnets would just barely fit, and they even stuck out a little from the surface. My intent originally was to glue them into their holes but have them exposed. With the new, thicker panels, I had enough depth to be able to drill deeper to embed the magnets fully in the panels and add some wood filler to cover the holes.

Some of my magnets were a little bigger than others, so I had to break out a bigger bit and cross my fingers that I wouldn’t damage the wood as I drilled. 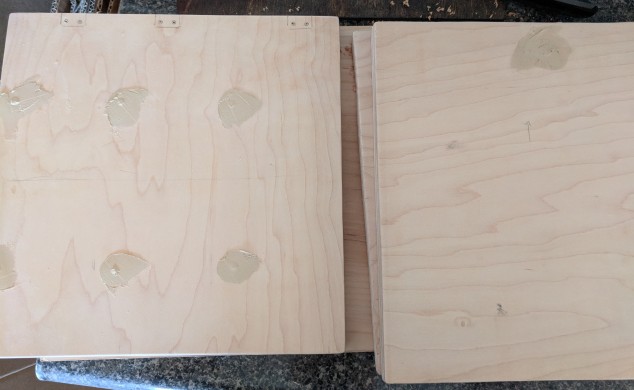 I figured out hole placement using index cards. I can fit as many as nine cards per panel (though I doubt I will), or of course I can stick plain pieces of paper or paper of other sizes on as well. The player (vs. DM)-facing side of each panel also has a magnet at top center, in case I decide it’d be useful to hang something on the front of the screen for their view. Next, I sanded the wood filler patches down.

Now it was time to stain each of the boards. I put three coats of dark walnut stain and three coats of oil-based spray-on finish on all of the surfaces. The picture below shows all coats of stain and, on the left panel, a first coat of finish. One thing I’m not really happy about is how much the wood-filled magnet holes show through the stain. I had hoped they would blend pretty well, and a couple of them do just look like little knots, but they stand out more than I had hoped they would (they’re more visible in person than in the pictures).

Once the panels had dried, it was time to hold my breath and attach the hinges (the part of the project at which things went sideways in my first try).

These are simple brass-looking hinges, and I didn’t do anything fancy to try to recess them in the wood or anything. I’m sure they’re not all perfectly aligned, but they’re good enough that the panels swing smoothly. Each set of panels stands alone pretty sturdily. Initially, I had planned to hinge the two sets of panels together as well so that they would accordion fold, but for now, I’ve decided not to. For example, I could imagine adding a dice tower between them one day, or just liking having fewer moving parts to worry about. They stack up fairly well when not opened, and though they’re not super precision panels of fine carpentry and are a little heavier and bulky than I had hoped for originally, they look decent.

I just finished them today and so haven’t played with them yet, but I wanted to see how they’d look and how functional they’d feel with some of the real papers I’ve used in the past affixed to them, and they seem potentially pretty useful.

I can imagine it’ll be a heck of a lot better than having all those index cards in a stack to shuffle through while also jotting notes, reading from the story itself, wrangling dice, etc. If you find the really nice DM screens out on the web, you’ll see fancy things carved or burned into the player-facing surfaces. I’m less of an artist than I am a carpenter, so I’m leaving mine plain (at least for now! — a month ago, I wouldn’t have imagined that I would use a screen, much less sink a few hours into making one, so who knows what I’ll do in the future).

My son and the neighbors we started a campaign with a couple of weeks ago are planning to play again this weekend. The other dad and I are going to switch of DM duty, so I’m on the fence about whether to let him break this in if he’s inclined or whether to hold it back for myself