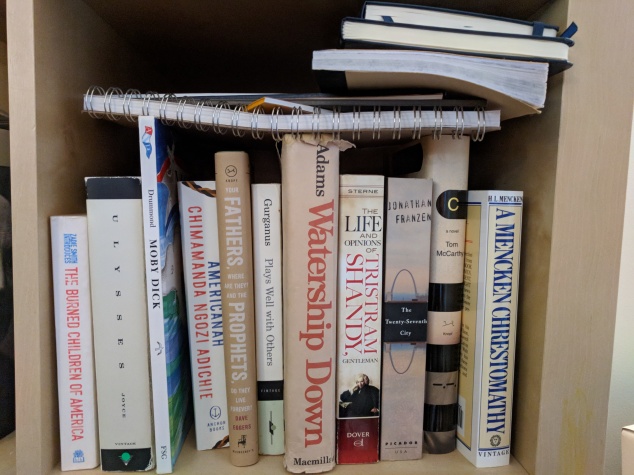 Here we end the penultimate row in my bookshelves series. Along the top there you see various and sundry notebooks I’ve picked up over the last few years for long-hand writing and a spiral sketch-pad I bought when briefly (and it turns out optimistically) thinking “I’d like to learn how to draw.” I don’t know why these’ve landed in this cubby, but they have.

The Burned Children of America is a short story anthology I got because it had a David Foster Wallace story in it. It also has several other good stories by well-known authors of Wallace’s generation like Saunders, Eugenides, Bender, Moody, Lethem, Lipsyte, and Foer, and it’s got one by Julia Slavin that really knocked my socks off.

I first tried reading Ulysses probably 20 years ago, and probably three or four times after that failed attempt, I started it and didn’t get very far at all past stately, plump Buck Mulligan. Finally, back in 2010, I led an online group read of the book and did make it through. I surely didn’t love every minute of the book, but I was glad to get through it at last, and though at the time, I said I didn’t know if I’d ever read it again, I suspect I probably will (and indeed have been feeling the itch a bit lately). This one I’ll hang onto if only to avoid sending my silly margin notes out into the world for others to read.

I don’t love this Moby-Dick children’s book, but I keep Moby-Dick books. I did read this one to my kids a lot when they were little.

I apparently misread Americanah. It read as a fundamentally sad book to me, but Adichie apparently laughed all the way through writing it. I think my misreading stems from my discomfort taking as comical the struggles of characters whose experience (and whose sense of humor about it) is so very far removed from my own privileged experience. Anyway, misread or not, I didn’t love it, but I do think Adichie is a fantastic novelist (her Half of a Yellow Sun garnered a rare 5-star Goodreads review from me and is one of my favorite reads of the last few years), and I’ll likely reassess this one at some point.

I remember nothing about Your Fathers…, but Goodreads suggests that I liked it quite a lot. I suppose I’ll look at it again some day.

When I was in college many years ago, regional author Alan Gurganus gave a reading that I believe was from Plays Well With Others, though I don’t recall whether the book had yet been published. I don’t remember loving the reading, but I did go out and read his well-known Oldest Living Confederate Widow Tells All, which I forget how I felt about. And at some point, I picked up this book, which I vaguely recall as being biting and sort of angry and sometimes probably a little boring and sometimes very funny. I’ve read a little bit more by Gurganus since and not loved it, but I would like to try this one again in the future, as I was still a pretty young reader when I last went through it.

I had never read Watership Down until we picked it up as a family read a few years ago. I had always assumed it was some sort of naval adventure based on the name (though that actually doesn’t make sense either). I loved it. It’s so well imagined and just awfully well put together. I recently suggested a reread to my family.

Tristram Shandy was a real labor. I read it as part of reading a series of sort of foundational frame tales a few years ago. Yes, parts of it are hilarious, but it’s also just so very tedious and annoying that it was a real labor for me to get through. I tend to retry the hard ones, though, so I imagine I’ll go back to it again some day.

I have a probably irrational antipathy for Jonathan Franzen. I thought The Corrections was reasonably well written, and I really hated Freedom, which just felt ham-handed and improbable (though in the realist tradition) and dumb. I didn’t read Purity because by the time it came out, I had read enough of Franzen’s other work and read enough things about him that I just didn’t really want to be connected to more of his work. I think that if his books really did the trick for me, I could put the antipathy aside, but I really just don’t think the work is all that good either. I’ve never read this earlier book of his, but I hang onto it just in case I brush this chip off my shoulder one day and decide to give him another chance, as I’ve heard this is a good one (but I mean you hear that about all his books).

Tom McCarthy generally writes things that tickle some fancy of other of mine. It’s been a bit since I read C, but I vaguely recall it as sort of Pynchon-lite in its treatment of war, technology, and spiritualism. I’ll generally try anything this guy writes and think of him as somebody to maybe revisit overall one day.

Ah, Mencken, what a troll. I first encountered him in a Southern literature class in college, and I bought this anthology of his work a few years later to get a broader sampling. I’ve never read it cover-to-cover, but it seems like the kind of thing I might dip back into from time to time for topical readings.

Next time, I’ll do a carriage return to the next shelf of cubbies, which features some good books but also a bunch of cookbooks that I won’t likely go into detail about and a mysterious background layer of books that hides some of my deepest shames.