On May 2 of 2011, I started work full time at a little company called Automattic that didn’t seem so little at the time. The company worked and still works remotely, meaning that many of us work in our pajamas from home or from wherever in the world our wanderlust takes us. I had worked for a company called Flock for about six years before, and that was a remote job too. The oldest of my two children will be 14 this summer, and I’ve worked from home for all but a few months of her entire life. It’s been such a privilege.

Every year, Automattic hosts what we call the Grand Meetup (“GM” for short), in which all who are able come together in one place. My first GM was in Budapest in 2011, and this was my first travel ever outside of the U.S. and Canada. We were about 80 people, and that gathering is pictured at top left in the photo below. Each year at the GM, we do a photo like this, and mine from this past September just arrived in the mail (see bottom right). We’re a little over 700 people now.

I don’t think of myself as a sentimental person in general, but I do have a very soft spot for these annual photos. I keep them grouped together on top of a filing cabinet in my office. I’ve worked one job or another, full- or part-time, since I was in my early teens (when I worked on farms and was paid in cash under the table), and I’ve been working as a grown-up with real grown-up jobs for very nearly half my life now. Although I’ve had any number of coworkers I liked, I’ve never worked with so many whom I liked so very much and with whom I’ve connected with as sincere a fondness as I do with many of the colleagues I’ve met through Automattic. 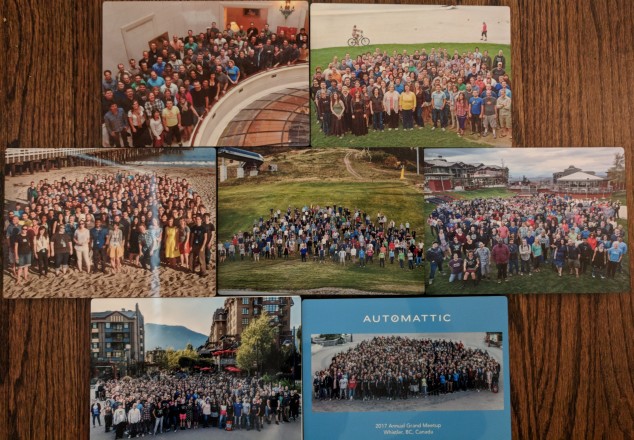