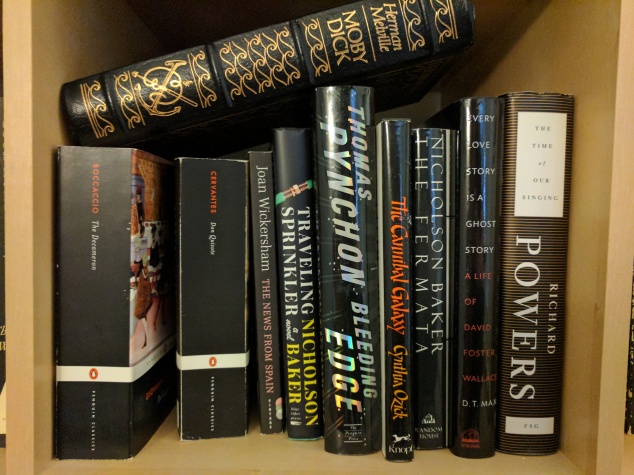 Here’s another humdinger of a shelf. Riding along the top there, we’ve got yet another edition of Moby-Dick. I’ve never actually read this edition, but it was a gift and I don’t really feel great about selling or donating a gift. The last time I remember doing so, it was Malcolm Lowry’s Under the Volcano, and my sister-in-law, who had purchased it for me from my wish list, busted me. I really wanted to like Lowry’s book because people whose opinions I respected liked it, but it just didn’t do the trick for me, and I was in the middle of a purge of a couple of hundred books to make room for things I did value as literature (vs. as gifts). Anyway, I’m keeping this one.

Next up we have The Decameron and Don Quixote, which I read together a few years ago during a period of reading frame tales (stories within stories). The Decameron is full of bawdy jokes and is sometimes boring and sometimes hilarious to the extent that a book about aristocrats escaping the plague by leaving the city behind to go out into the country and tell one another moralistic and sometimes bawdy tales can be. Don Quixote is also really funny (if sometimes a bit tiresome) and is one I’ll likely reread in a decade or so.

I forget where I heard about Wickersham, but I picked this book up without really knowing what to expect. I didn’t love its first story, but on the whole, the stories wound up being really good, really well done. I kept the book as a reminder to read more Wickersham later.

This shelf holds two by Nicholson Baker — The Traveling Sprinkler and The Fermata. What an off-beat character the main guy (Paul Chowder) in these novels is. He’s kind of delightful and kind of an asshole. The books give us his childlike view mixed with I guess a bit of depravity (especially in the latter book). I liked Sprinkler in part because it taught me what a traveling sprinkler is as a real thing in the world (and what a neat thing, full of possibility for metaphor). I think there’s another in the series of Chowder books, but I forget whether I’ve read it if so. I’m sort of mesmerized by Baker’s easy-seeming style. I should probably get rid of these and read them, if ever again, from the library.

I’m a bit of a Pynchon junkie. When I read Bleeding Edge, I thought of it as the most accessible long-form Pynchon to date. This of course means that it’s not really full-on Pynchon, which is sort of disappointing but also sort of a relief. I keep Pynchon, so even though this one didn’t knock my socks off and I doubt I’ll ever read it again, on the shelf it remains.

I was talking to a friend just recently about Ozick. She’s somebody whose name I learned by reading interviews with David Foster Wallace, whose talking about the stuff he read or admired has informed a lot of what I’ve read over the past two decades. I’ve read five or six books by Ozick now, and they’re almost always really good. They don’t pack much of an emotional punch for me in general, but they’re just well written and so very smart, and I read her in part because I figure that reading smart stuff will make me smarter. To my friend, I likened Ozick to Alice Munro in terms of like the simple and matter of fact correctness of the way her stories are put together and narrated, but like Munro writing in a way more informed by academia than about the lives of Canadian women. I don’t remember a lot about The Cannibal Galaxy in particular, but in general I’m keeping and will plan to reread Ozick.

Every Love Story is a Ghost Story is a brief biography of David Foster Wallace. I wrote a bit about it here. I keep it because I keep Wallace’s work and ephemera.

Finally, we have Richard Powers’s The Time of our Singing. I haven’t read this book in over a decade, but when I read it, I remember finding it really marvelous. This was at a time that I had been reading a fair bit of Powers and finding his work disappointing. He was regarded as sort of a wonder boy of literary fiction, but I thought his books were contrived and awkward, and it seemed often enough like he maybe hadn’t ever actually met or spoken with a real human being for long enough to be able to write one convincingly. This book was such a nice change. Looking back, it’s hard for me to say whether it was actually beautifully done or was just a relief after so much other bleh work I’d been reading by Powers (a stomped toe being a sort of relief after so many kicks in the nuts). In any case, it’s one I’d like to try again sometime.

In my next bookshelves post, we’ll transition from blacks and grays into beiges and whites, with of course a few of the usual suspects lined up.