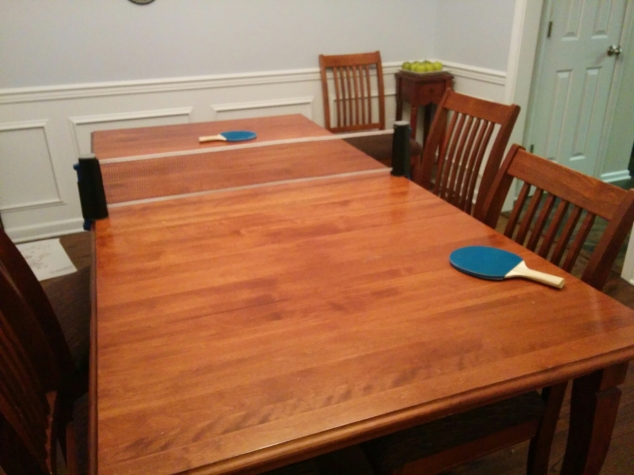 Last year for Father’s Day or my birthday, the kids got me a little portable table tennis set. You just clamp the net posts to an available flat surface and — boom — you’re ready to play table tennis. We don’t use our formal dining room very much for dining. In fact, the table is often covered with things that get dumped on it rather than put away in their proper places. We needed the seating for Thanksgiving, so we had to clear the table off, which meant that the time was ripe for playing some table tennis. The table’s a bit smaller than a regulation table, but it’s still fun to hit with the kids.

The kit came with two paddles and a little sack made of netting to store the three balls in, and my son and I both delight in asking one another to go grab the ball sack so we can play some table tennis. (Yet another instance of why I should win Father of the Year.)

My daughter, who hasn’t typically been the most physical or coordinated of children, is actually pretty good at getting a little volley going, and I really enjoy hitting with her. My son tends to play on the table top itself a bit less consistently than she does, and we wind up banking off of walls and the floor or just smacking the ball hard at each other, which is also fun, if differently so.

One thought on “Table Tennis”