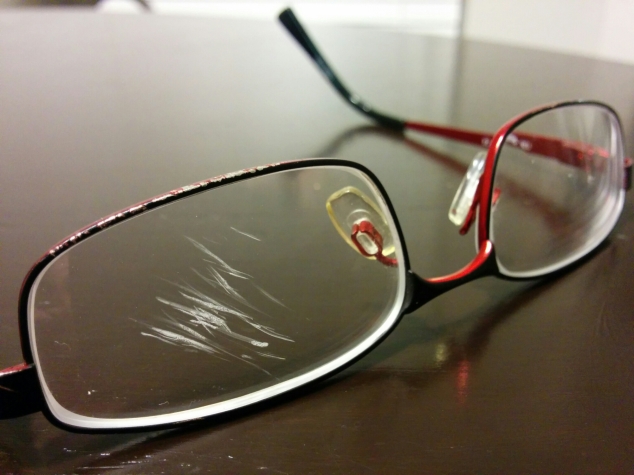 This weekend my son came home after having been outside for a little bit. He had clearly been crying, and he was holding his glasses in his hand. Reportedly, he had gone up the hill (where he’s not really supposed to go without asking) to fetch a friend, and the friend’s dog had gotten out the door, leaped on him, and absconded with his glasses. I maybe 70% believe that that’s precisely what happened. The glasses look more like he tried to use them as a skateboard.

He’s had these new glasses for just a month or two, and the left lens is irreparably scratched, with gouges deep enough that the whole “the dog ate my glasses” story seems a little fishy to me. He had been crying not because he was hurt but because he was afraid he’d be in trouble, which even if I find the specifics of his story a little suspect, he wasn’t, and I feel bad that that’s what he was worried about. I tend to think I’m pretty easygoing as a parent, but really I’m probably sort of a hard-ass, if one with a mostly very gentle and (I think/hope) understanding temperament. I reassured him that though the damage was unfortunate, he wasn’t in trouble over it, and mostly I was just glad he wasn’t hurt, and new glasses could be acquired.

I resisted the brief urge to tell him that I guessed we knew what Santa would be bringing him for Christmas this year.

One thought on “Scratch”